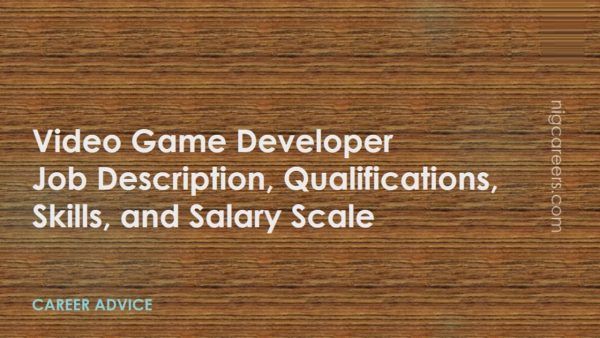 Who is a Video Game Developer?

A new niche has evolved to become one of the most essential and patronized sub-sectors in the gaming industry. Video game development is slowly gaining ground and gradually taking over the gaming sector. The reason is not far-fetched; video games have a way of capturing the minds and attention of kids, young adults, and adults alike. Apart from being a go-to tool for leisure and relaxation, some video games carry and pass important messages that are of benefit to all and sundry. No wonder a plethora of individuals are beginning to explore the video game industry.

Additionally, video game developers oversee and mastermind the developmental procedure of a video game. They can use already existing designs or write coding that will bring the video game characters, environments, and other elements to life. They specifically organize and plan how players will advance through the different game levels. A video game developer creates the game’s mechanics, develops software tools, builds the artificial intelligence of the characters, and troubleshoots problems as they emerge. They ensure that each written line of code works as planned or intended. Hence, a good video developer must be vast and fluent in several coding languages such as Python and JavaScript for example.

Developing or creating a video game from the initiation phase to completion can take years and involve a team of experts and professionals. It begins when a developer or team creates and designs the particular game’s look and figures out how it plays. Then, objects and characters are animated; audio, programming, and localization follow suit. Finally, the developed or created video game is tested, edited, and produced for use and sale respectively. Depending on the individual, a video game developer may choose or decide to concentrate on a specific area of programmings such as engine, artificial intelligence, network, tool-chain, or graphics.

First-party developers: A first-party video game developer is part of an organization or firm which manufactures video game consoles and develops them exclusively for it. They may use the name of the organization, have a specific division name, or have been an independent studio before being purchased by the console manufacturer.

Third-party developers: A third-party video game developer may also publish work or games for a video game publisher to develop a title. Both publisher and developer have considerable input in the game’s content and design, however, the publisher’s wishes generally override those of the developer.

Below are the video game developer job description examples you can use to develop your resume or write a job description for your employee. Employers also can use it to sieve out job seekers when choosing candidates for interviews.

As a video game developer, you will need to;

Collaboration skills and teamwork: The creation and production of video games is not a solo or independent project; rather, it involves drafting, revising, brainstorming and collaboration among members of a team. A video game developer or designer needs to practice and cultivate the culture of working effectively as part of a team. They should be conscious of the effects of their work on the entire team.

Storytelling ability: This is one of the most important skills to have in video game development. A good video game developer must produce compelling plotlines, develop characters, and incorporate humor, conflict, and suspense to capture the game player’s attention and curiosity. Also, they should write interesting jokes, compose matching music, and draw catchy animations.

Knowledge of programming: You cannot be a good video game developer without adequate knowledge of programming. Most video game developers choose their programming expertise based on the games they want to design. They use codes to build game mechanics and environments. Developers must also be conscious of the modality or platform with which the player (s) will be viewing the game.  For example, some languages are better suited to mobile phones while others are excellent on consoles or desktops.

Knowledge of multimedia development software: Software applications such as Adobe creative suite and toon, and boom harmony help video game developers improve the quality and output of their work. Video game players often judge the quality of the game based on the clarity of graphics and animations.

Animations: Since design and animations form part of the core of video games, it is important to learn and know the relevant software involved. This can help the video game developer to produce immersive and stunning video games. Being familiar with animation programs can enable developers to show their sector knowledge.

Time management: Video game developers must prioritize deadlines; this ensures that the project is completed on time. You must be ready to work quickly and entirely with the specified time.

Critical thinking: Designing a video game involves planning and strategizing as players are expecting to find tasks and obstacles built in the game. Therefore, a video game developer must have the ability to analyze information and arrive at a reasonable solution.

How to Become a Video Game Developer

Enumerated below are several steps you can take to become a video game developer;

Get formal education: The majority of video game developers have at least a formal education background; mainly a bachelor’s degree in computer programming and other related courses. Recruiters and gaming firms prefer applicants who have earned and possess a four-year degree because they have more in-depth knowledge of gaming.

Develop your physics and maths skills: These two subjects are crucial for every video game developer. Hence, develop your coding skills by having a solid background in physics and mathematics. These skills enable you to create equations that can direct computer systems and graphics and lighting that make video games more interesting.

Improve your software engineering skills: A video game developer needs to be dexterous in hardware technology and other programming languages to write codes that will craft everything about the video game.

Create your video game developer portfolio: Next, try and design or develop your video games. Start with simple games and then work your way up to more complex ones.

The average salary of a video game developer is 273,000 NGN per month. This includes benefits such as housing, transport, health, and so on. Also, it depends on the location, years of experience, and the gaming studio or enterprise. The highest salary range is 420,000 NGN, while the lowest is 139,000 NGN. The median range is believed to be 268,000NGN. This implies that half of video game developers earn above 268, 000NGN while the other half earn below 268,000NGN respectively.